Liana (with baby in tow sometimes) is also doing a great job of documenting the highlights of the sessions.

So far it's been a really great experience. Along with friends and familiar faces, I'm also meeting amazing people from all sorts of backgrounds and it's doing wonders for my reputation (heh!)

The single track, 30-minute format is wonderful and we've gotten ample praise about it. Everyone in the audience gets the same content at the same time and has plenty of opportunities to meet informally and discuss what was presented. We have quite a mix of experience levels in the audience -- keeping the talks short and sweet ensures that no single group is bored for an extended period of time. We've covered the gamut of topical ranges, from pure case study "this is what we did" in the New York Times newsroom to Philippe's detailed explanation of DTrace.

Our Tuesday morning keynoter, Giles Bowkett, canceled at the last minute, so I had to scramble. After some undecidedness, I opted to try a concept that I witnessed last week at Conferencia Rails in Madrid. Sebastian Delmont and I brainstormed the content over single-malts in the hotel bar last night. 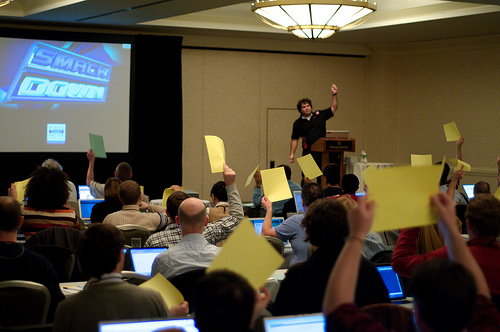 We distributed two pieces of colored paper to each person, which they used to vote on their preferred choice from the two displayed on the screen. After most of the votes, I asked for the audience to chip in with an explanation (and occasionally apology) for their choice. 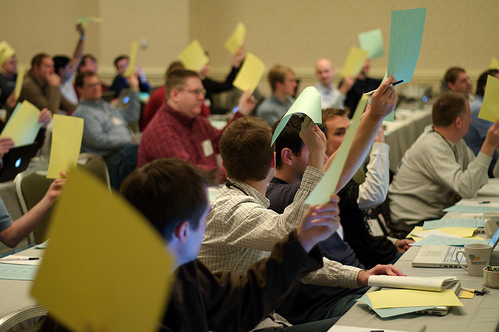 vim vs emacs:  About half of the audience voted, skewed heavily to vim. I didn't want to start a "religious war" so I didn't ask for elaboration.

svn vs. git:  Heavy voting, with fairly even split (perhaps slightly skewed to svn). Will from

jQuery vs. Prototype  Apparently when I introduced this lineup I said "...still using Prototype" which I apologize for, since it was leading the audience and it got a laugh. I've been a fan of Prototype for a long time, but Hashrocket as a whole has switched over to jQuery in the last 6 months.

Chad Pytel told us that he's still using Prototype on existing projects because it doesn't make sense to switch over, essentially "if it's broke don't fix it".

Sinatra vs. Camping  A few people in the back of the room voted for Sinatra. Matt Bauer told us that it's good for very small standalone web apps and yes, it's ready for production-use.

Blueprint vs. YUI  About half the audience voted, skewed towards Blueprint. Someone pointed out that the 960 Grid System is cool, and then we spent at least 30 seconds trying to figure out the name and URL.

MySQL vs. Postgres  Heavy vote for MySQL. Consensus appears to be that if you come from big enterprise databases then you're going to prefer Postgres. Also, Postgres is more standards-compliant and

blank? vs. empty?  This one was a joke (pretty much) that Sebastian and I included in the smackdown to remind the audience to consider the semantic meaning of API methods. The correct vote would have been for both, since they are not used for the same purpose. The blank? method is for strings and returns true for strings consisting of purely space characters. The empty? method is primarily meant for arrays, but works on strings and returns false for strings consisting of purely space characters.

attachment_fu vs. paperclip  Evenly split audience, but consensus was that Paperclip is better than attachment_fu in terms of features and flexibility and its implementation code is very clean and easy to figure out. Also, paperclip allows for attaching more than one file to a single model.

system gems vs. frozen gems  Frozen gems won hands-down. Bryan Liles said that if anyone thinks system gems is the way to go then obviously they aren't doing production deployment. Sebastian chimed in that using system gems saves 10 seconds on his deploy time, which everyone took as a joke. Not sure if he meant it seriously. :)

Vlad vs. Capistrano  A handful of people voted for Vlad, but otherwise the audience favored Capistrano heavily. I asked Matt Bauer to defend Vlad. He mentioned some reasons about its simplicity and how bad early versions of Capistrano were, but in the end he said it's not worth switching at this point because the pain-points of Capistrano have been resolved.

Mocha vs. Flexmock  Mike Schwab was the only person who voted for Flexmock, but wasn't really able to defend the choice except to tell us that Chad Fowler and Marcel Molina suggested it once at a conference. (Comments welcome -- Is this reason still valid? Was it ever?)

FactoryGirl vs. ObjectDaddy  Not too many people voted and those that did went for FactoryGirl. Earlier in the conference we heard from the testing panel that ObjectDaddy has way too much magic to be useful.

resource_controller vs. make_resourceful  A couple of people voted for each. Got the impression that the audience was largely unfamiliar with these great plugins, so I asked Joe Fiorini to explain them. Bottom line, if you're writing your apps in a RESTful manner then you should check out and use one of these libraries because it'll spare you a bunch of boilerplate code.

HAML vs. ERB  One of my favorite topics! The split was maybe 33% HAML with surprisingly heavy voting. The reasons for sticking with ERB? Mostly to keep designers happy or based on what I detect as a resistance to change. I gave my typical impassioned explanation of how HAML lessens the amount of mental mapping needed to effectively think of your views as semantic markup and match them to your CSS.

TinyMCE vs. FCKEditor  Rich-text editor widgets in Javascript. They're not that different from each other and the audience was all like, "Meh.." :)

restful_authentication vs. clearance  This one was funny. A handful of votes went up for Clearance, which disturbed its author, Chad Pytel. He stood up and told us not to use it since it's not ready. The offshoot of Github's popularity, is that once public projects go up, they start getting used -- whether they're ready or not. :)

Test::Unit vs. RSpec  I was pretty much out of time at this point, so I skipped a bunch of slides to this matchup. Even distribution and some confusion about whether Shoulda belongs to TestUnit (yes) or RSpec. I think the consensus is that it doesn't matter as long as you're putting some effort into testing. I wondered to myself if the people that didn't vote weren't doing any testing. Things that make you go "hmm..."

If you're so inclined, take a moment to tell me your vote for the following smackdown matchups that I didn't have time to get to in the session...

Listed below are links to weblogs that reference Live from Pro Rubyconf '08 / SMACKDOWN: