Early this year, I commissioned a competitive research project with the goal of producing real insight into how other web design and development shops out there do business. The results were interesting, to say the least, but due to time constraints I haven't been able to do much with them. I'll be sharing highlights of the data with you over the coming months, starting with this introductory blog post.

First, an explanation of how the data was gathered. First we helped our researcher, a potential entrepreneur with a good idea, to flesh out his web startup concept (involving social media and e-commerce). We crafted the scope of the project to correspond to the type of complex web application work that Hashrocket has designed and built on budgets ranging from 100 to 500 thousand dollars. The project details were crafted well, probably beyond what was necessary in order to do the study.

Over the course of a month, our entrepreneur painstakingly contacted a total of 103 web design and development companies, primarily via email. 54 of those companies followed up to some degree or another, ultimately leading to in-depth conversations with 42 of them. That leads to one of the first eye-opening revelations of this study: Almost half of the companies we contacted didn't follow up properly or at all. In fact, about 6% of our initial contact emails bounced! Has that much of the industry gone out of business this year? Or is email that unreliable a contact method?

It is difficult to discern whether the firms that ignored initial contact did so because they were careless or simply too busy. Perhaps the work didn't interest them? One well-known firm had an auto-reply message to the effect that they were too busy to respond to anything other than urgent requests, adding that their lead time for starting new projects was at least 3 weeks or more. Ballsy.

I will not be identifying any of the companies researched, although I will say that many well-known shops were on the list, including one behemoth that ended up being excluded from much of the results by merit of being such an outlier (ahem). The list of companies to contact was first drafted by naming the shops we know off the top of our heads, then enhanced with shops found via Google searches and a variety of online resources including:

Our entrepreneur purposely tried to contact providers with a variety of technology specializations (not just Rails shops) and did not express a preference for a particular technology, instead asking the shop to give their preference. As you can see in the graph below, we were able to include a healthy number of PHP and .NET shops. 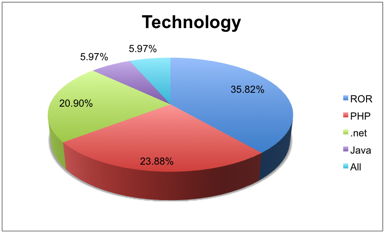 Somewhat surprisingly, but perhaps due to our small sample size, none of the shops expressed a preference for Python. We also were not able to talk to that many Java shops. Perhaps Java really is losing steam as a mainstream web technology?

The size of the companies studied varied quite a bit. In a future entry in the series I plan to analyze a bit more carefully the smaller end of the spectrum, but for now I'll simply give you a graph showing the distribution by headcount. 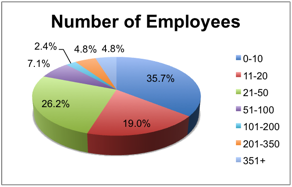 We also got data on the years in business of the companies contacted and what kinds of people they employ. By itself, the years in business distribution seems somewhat even and perhaps doesn't say much, but I hope to break down some of the other data in relation to maturity of an organization and hopefully yield some interesting results.

On the other hand, the employee type breakdown did surprise me. The vast majority of the firms we spoke with claimed to employ only full-time employees (FTE) rather than a mix of FTEs and contractors. Even less used only contractors, with a significant fraction of the mix being shops with a main market presence and offshore development resources.

When we asked companies about the average years of experience of their developers, most said "it varies," which we took to mean that junior developers would be involved. Fifteen percent gave us a number between 1 and 3 years, which doesn't inspire much confidence! 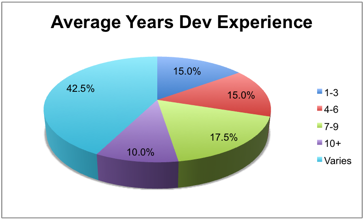 Over half of the companies we spoke with were willing to share annual revenue figures, with the rest declining to answer for confidentiality reasons or simply not knowing. 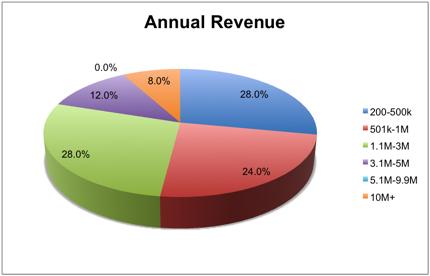 We're guessing that many of the numbers we were cited were make-believe, because the variety of revenue figures was very surprising, especially when analyzed in conjunction with head count to derive per person revenue numbers. Could the spread in profit margins really be that wide? 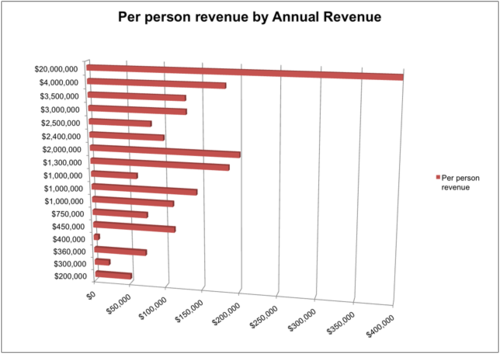 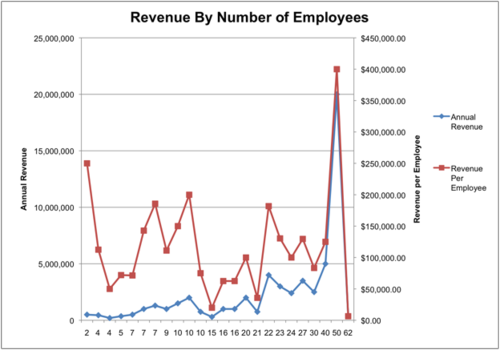 The next entry in the series will delve into hourly rate data, which I'm sure you don't want to miss.

Listed below are links to weblogs that reference Competitive Research Series: Part I: