A post by Jeff Atwood bemoaning the state of Google's ranking system caught my attention this morning. I have had similar feelings about a decline in the quality of Google's search results. Jeff and others are wondering if the failure to give priority ranking to primary content sources is due to limitations of Google's search algorithms. I suspect that Google has at least some idea of good versus bad results, based on observations of their Alerts system.

For obvious reasons, I've had an alert set on the phrase "The Rails 3 Way" for months. Less than 2 weeks ago, I noticed that there was an option for Google Alerts for receiving All results vs. Only the best results. Out of curiosity, I changed over to All Results.

What a difference! Instead of a few interesting alerts per week, I started getting up to dozens per day, almost all of which were some variation on

Google knows that stuff like this is crap, otherwise it wouldn't have an option in Alerts to filter it out. So the question is: Are they not taking greater action against spammers because it would hurt their bottom line? And, if so, is that evil?

I'm curious whether Jeff has any similar and/or relevant observations using Google Alerts, because the phenomenon I'm describing here is not exactly the same as what he's complaining about. And to be fair, I went ahead and did a search for The Rails 3 Way pdf and the book's official source is #1, with fileshare services not starting until #3. 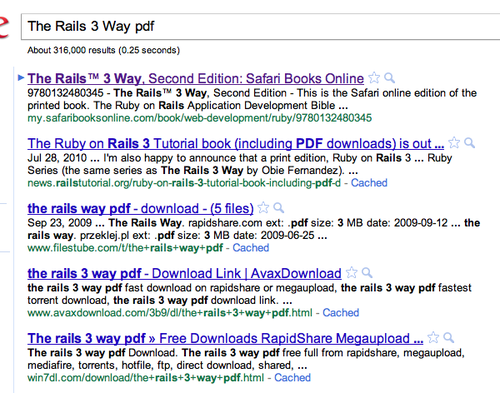 Listed below are links to weblogs that reference Google Probably Knows What Crap Results Are: