« Since I finally got my LaunchRock Invite... | Main | On not reading the way I used to » 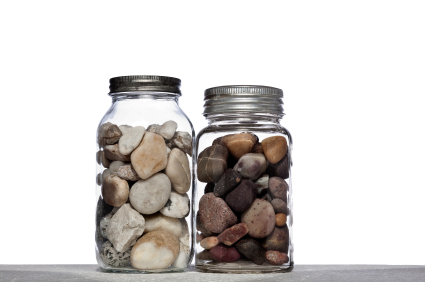 So you're an entrepreneur and you're doing a lean web startup using Ruby on Rails. You're teaching yourself Rails and proud of yourself for going at it alone and not spending a bundle of cash. You know that you can't afford to hire a world-class shop like Hashrocket, Thoughtbot or Pivotal Labs to work on your project, because the minimum project budgets they are interested in are in the six figures.

Incidentally, this post is strictly my personal opinion is in no way endorsed by or representative of anyone at Hashrocket, ThoughtBot or Pivotal.

Well, allow me to let you in on a little secret. You can absolutely work with those firms and maximize the benefit provided to you for as low as a couple thousand dollars. Just not in the way that you might think. And it won't be the way that they would prefer to work with you, but they'll still do it.

See the jars above? Consider the container to be the size of the available billable hours in a month. The large rocks and pebbles are current projects. It is impossible to fully utilize the space available unless you start adding smaller rocks and pebbles and eventually, grains of sand. Even the busiest consulting shops always have small amounts of utilization available. It's the slack in the system, time for people to relax, the empty volume of the jars. Despite the importance of slack, the profits of a consultancy live and die by utilization. When I was in charge of Hashrocket, which was generally busy, do you think I stressed about utilization? Yes I did. Every fucking week of the year. It's one of the reasons I got out of the consulting business. Will most consultancies take advantage of opportunities to bump up their utilization with profitable small work? Yes! The trick is how to make them do it, even if they resist at first.

Before I describe that trick, let me explain the backstory that provoked this post: Last night I got to know a couple of young entrepreneurs from NYC, Chris and Philip. They are working on an interesting little web startup named Meeteor. It's technology driven. During a conversation about testing, Philip told me that he spends a couple hours manually testing the app everytime they're ready to do a deploy. They don't do any automated testing, because they don't have the time to figure out how to do it well. My ex-ThoughtWorks friend Kurt Schrader was present and we did the requisite head shaking and tsk-tsk-ing about their failure to test their code. But the truth is, if I were in these guy's shoes I would probably do the same thing. It takes years to get really good at TDD and integration testing to the point where it doesn't slow down your progress tremendously. Sure, without tests you'll build up technical debt to the ceiling and the whole project may eventually collapse under its craptastic weight, but in the meantime the perceived slowness of figuring out how to test your stuff will demoralize and destroy your productivity. It's a no-win situation for newbies.

My advice to the Meeteor guys (and to all of you in similar situations) is the secret alluded to above: Hire help from Hashrocket (or any other competent firm) but only for a day or two at most. And I'm going to tell you exactly how to do that:

* Right now (Mar '11) a total budget of $3k is probably very reasonable for what I'm describing.

In the case of my friends at Meeteor, they'd want their expert to implement some cross-browser selenium integration test cases. All they need is one of their most difficult ones, because once they have the scheme setup and one or two examples to draw from, they're smart enough to figure out the rest themselves.

Remember that the point of this technique is to buy as much great coding as possible in a day or two. Then you can use the results for inspiration for your own hacking. This technique works with any superstar programmer whether they are coming from a shop like Hashrocket or not. Shop refuses to work with you? Hire one of their guys for a single-day side gig! In Europe and using Mongo? Throw a couple thousand at my friend Durran to pair with you for a day. You get the idea. Just make sure that the person you hire works full-time as a programmer every day. This scheme wouldn't work with someone like me; I have plenty of depth, but slow velocity since it's not what I'm doing everyday.

The productivity boost you can get as a newbie developer from working a true expert for just a day (or two) is exponentially more valuable than what it will cost you in cash.

Listed below are links to weblogs that reference Hey Web Startups, Hire Consulting Firms On The Cheap!: