« Metaprogramming Your ActiveRecord Objects at Runtime | Main | How Insignificant Is Internet Explorer These Days? »

Forced to disable Firefox Inspect Element due to muscle memory

It's amazing how much we take for granted certain little tasks that we do so often they become muscle memory. The latest powerful example of that fact for me has been the annoyance provoked by the addition of a native Inspect Element option to the Firefox 10 context menu, exactly where Firebug's Inspect Element used to reside. 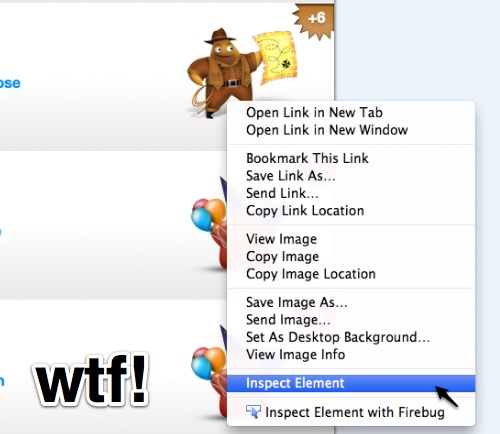 If you had asked me last week how many times I hit inspect element in a given day, I might have guessed a dozen or so... Ha! Turns out I do it more like hundreds of times a day! And you build serious muscle memory when you do something so often. Yesterday, despite repeatedly making mental notes of the fact that I needed to move my pointer 1 more menu item down the list to the "Inspect Element with Firebug" item, I would just forget. Over, and over, and over again. Sometimes 30 seconds apart. To the point of crying out in frustration.

Of course, you can turn off that menu item using Firefox's about:config screen, which I suspected was possible but had resisted researching based on, well, based on I don't know what, some perveted sense of principle that I should be able to learn something so simple! Still, major props to Jared Habeck:

So the remarkable part of this experience was realizing just how ingrained that particular operation was that no matter how hard I tried, occasionally even sometimes when I was purposely thinking about "ok self, remember to click Inspect Element with Firefox" MY FINGER STILL DID THE WRONG THING!

Crazy. As a sidenote, I've tried the Safari and Chrome's inspector modules and they don't even come close to competing with Firebug. I don't use Firefox for anything else other than development, which has the convenient side effect of letting me CMD-Tab over to Chrome for everything else that you browse for during development, and then back to Firefox when I'm ready to keep working. It's a nice little workflow hack IMO. Anyone else do something similar?

Listed below are links to weblogs that reference Forced to disable Firefox Inspect Element due to muscle memory: